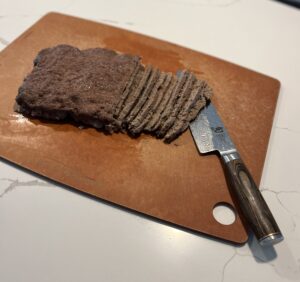 Not all meat is gluten free

Did you know that most commercial gyro meat may have fillers like bread, soy and even MSG? For those who want or need to be gluten-free, this can be a problem. I did not really think about it until Justin and I were on vacation and decided to split a gyro. I remembered how much I enjoy those flavors but have not indulged in so long, mostly because I just didn’t think about it and haven’t spent any time around Greek food. In the past I may have had a salad with the gyro meat instead of the pita bread and so it had me wondering…..what was I really eating?

On the ride home I decided to do some investigating and was really shocked at what I discovered! I thought that Gyro meat was all lamb, but apparently it is not. It is made from beef and lamb and some added fat, and most places it is filled with bread and soy to make it go farther, and msg to preserve it. Traditional Gyro meat is made by stacking slices of lamb, beef and maybe chicken and fat. They are pressed together in a cone shape and slow roasted which blends the layers together. Then thin slices are cut off and browned in a pan before putting in a pita for a sandwich or on a salad.
After reading about that, I decided that there must be a way I can re-produce the flavors on my own at home without fillers and without  layering meat and a certainly don’t own a rotisserie! 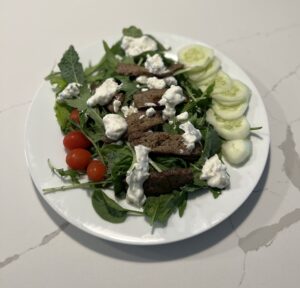 I researched a few recipes and in true “Victoria” fashion, I merged together a few based on what I had available to me, as well as just my instinct to what flavor I wanted to lean towards.* Disclaimer : I am not a chef, I just like to play one sometimes and make cleaner versions of food I like, but that I wouldn’t normally indulge in. 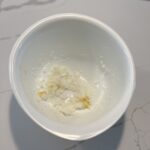 Using a food processor, mince onion and squeeze out all of the water (onions have ALOT of water!)

Mix the ground lamb, ground beef, spices, onion and garlic together with your hands first and then using a food processor, blend the meat a little at a time to make basically a paste. Set aside as you go and combine it all at the end.

Make a large packed ball and refrigerate for about 30 min to an hour.

Using parchment paper, press ball into a loaf and put into loaf pan or on a cookie sheet with edges so you catch the juices. 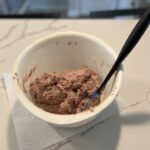 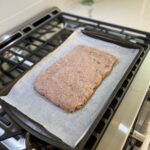 Bake on 350 for about 40 min or until temp reaches 165 degrees. Do not overcook because it is very easy to dry out.

Let the meat stand for about 30 minutes and then collect the juices. Transfer the meat to a cutting board. Slice into thin slices and then use the juices to brown slices before serving. 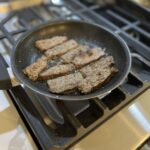 As you can see  I made ours into a salad, complete with mixed greens, cucumber, tomato and tzatziki. I bought the tzatziki because the store I was in had no more fresh dill. I also chose to use goat cheese instead of feta because its creamier and less salty as well as the tzatziki had a little feta in it.

What I would do differently

I wrote the recipe the way I would do it next time. I do not have a food processor and so I used my immersion blender. I almost burned it up and it didn’t get all of the meat into the paste needed for the best texture. I also did not press the meat into a tight enough loaf and so it was a bit harder to slice. I would also let the meat almost totally cool for better slicing. You will be reheating when browning  anyway. All in all the flavor was spot on and Justin enjoyed it as well!

This was a fun experiment and I will definitely make it again. I may even attempt some home made pita next time!

*If you have a recipe you would like me to attempt  to make “healthier “ or “cleaner”; send me a message and I will see what I can do!

Affiliate Disclosure: We may be compensated for any products listed/mentioned